Everybody who has watched at least one episode of Buck Rogers' second season will remember Hawk, Buck's silent sidekick. But what do we really know about Hawk? How did he join Searcher and become friends with Buck? Why was he (almost) never cheerful? And where did he get that fancy ship? Most of these questions were answered in the season's first episode, Time of the Hawk.

In Time of the Hawk, we see how Hawk and his wife Koori come home from a trip, longing to be reunited with their family and friends -- only to find them all murdered by the hands of humans. In reaction, Hawk vows to kill all humans who cross his path. He starts attacking human ships and outposts all around Throm, their home planet.

When the Searcher comes across a space freighter destroyed by Hawk, Buck Rogers is sent out to stop him. In an attempt to lure Hawk out of hiding, Buck abducts Koori from their home at the Valley of Eagles. This leads to a mighty dogfight between Hawk and Buck, in which Koori is accidentally injured. Hawk and Buck join forces to get her to help, but Koori dies nevertheless. Hawk is now the last of his race -- he has lost everyone he loved, and the pain of this will never leave him.

From killer to crew member

Hawk is finally brought aboard Searcher, to be judged by a Galactic Court. It is never mentioned how many people he has actually killed (at least three from the space freighter), but since he had been attacking humans for a few weeks before his capture, he must have made quite a few victims. At any rate, it is clear that the Court will sentence him to death.

When Hawk refuses to speak before the Galactic Court, Buck jumps to his defense. In a moving plea, he manages to convince the Court that Hawk should be allowed to join the Searcher crew, instead of being sentenced. Hawk's mission can be the same as theirs: to search for others of his race. After some encouragement by his new friends, and helped by the thought of Koori, Hawk finally agrees to start a new life aboard Searcher.

Despite his violent past, Hawk quickly gains the trust of the Searcher crew. In the first episode after Time of the Hawk, he is already sent along on a mission which is crucial for galactic peace (Journey to Oasis). And after that he is frequently seen on the bridge, handling the ship's controls, or performing other responsible duties.

Since the events of Time of the Hawk, a special friendship has developed between Hawk and Buck -- both alone, "out of time, out of place". They strongly rely on each other, and Hawk is often seen helping Buck out of a tight spot (Mark of the Saurian, The Golden Man). When Buck is accused of being responsible for the 20th Century's World War III (Testimony of a Traitor), Hawk risks another trial to help him prove his innocence.

Although Hawk is very much at ease with Buck, he tends to keep a polite distance from the rest of the crew. Nevertheless, in all his actions he shows a deep care not only for Buck, but also for Wilma and Dr. Goodfellow.

History of the bird people

Hawk's ancestors originally came from Earth, where they used to live on what is now Easter Island. (Easter Island does indeed have a bird-man cult, and numerous rock carvings of bird people have been found there.) In terms of evolution, the bird people were thousands of years ahead of the human race. However, when humans finally started to spread across the earth, Hawk's ancestors were quickly wiped out, apart from a few who fled to the stars. These survivors were so afraid of "being different" that they never flew again and as a consequence lost their wings.

It is never explained how the bird people managed to reach the stars. Presumably they did not fly there on their own wings, which means that they must have been able to build spaceships when the human race was still in its infancy. However, given their advanced technology, it seems quite strange that they were unable to defend themselves against a bunch of primitive humans. Let's just say that this remains one of the many unsolved mysteries of Easter Island.

Hawk does not have wings, but he did inherit the flying instincts from his ancestors. These make him an extremely good pilot -- better even than Buck Rogers. Many people will remember Hawk's "cool" ship, shaped like a bird of prey with foldable wings and retractable talons. In Time of the Hawk, Hawk uses his ship's claws to grab and destroy human spaceships, and he accidentally injures Koori with them in his fight against Buck. We also see the talons in action in Testimony of a Traitor, where Hawk uses them to stop a marine from pursuing Buck.

It seems that Hawk's ship must have been custom-built for him, and this raises the question where he got the money to pay for it. One possible explanation is that he has earned it flying as a pilot; however, it seems unlikely that a pilot's wages would have been sufficient for a ship such as this. It's also possible that Hawk was entrusted with the ship by his people to defend the world as a fighter pilot, meaning that the ship was not his personal property but government property, that government being the government of Throm. However, if Hawk could just leave the planet on some excursion with his wife aboard (meaning that he probably wasn't on a mission), then surely there must have been other fighter pilots available with similar fighter ships of their own. Otherwise, Hawk would be guilty of dereliction of duty and his absence would make him partially responsible for the slaughter of his people. More unanswered questions. 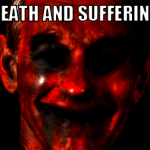